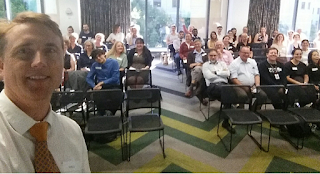 Phillip taking a selfie before presenting.
I'm the one waving up the back.

I have been to several TeachMeets.  This particular TeachMeet was held at Google headquarters in Sydney which was one of the main attractions for me.  I missed out on one two years earlier and as I searched for the Twitter hashtag for this evening I found an exchange that occurred about the use of #TMGoogle - the issue being that TeachMeets are supposed to be teacher ran and teachers as presenters, no sponsorship.  However, to host a TeachMeet in a cool location such as Google HQ there is a trade-off.  Tonight I felt the trade to be rather unequal.  The hashtag was not #TMGoogle but perhaps it should have been. It seemed every second speaker represented Google and was promoting something, useful somethings, but advertisements nevertheless. An extra grating factor was that teacher presenters were held to their time limits, albeit poorly, speakers not being deterred by soft Star Wars toys being thrown at them when their time had expired, yet Google presenters had limitless time.  And trust me, the teachers were much more interesting than the Google employees.

The stated theme of this TeachMeet was ‘Solve for x’, thereby promoting problem solving in education, that students solve whatever issue ‘x’ represented for teachers and/or students. The evening was officially launched by Kimberley Sutton through a YouTube video to explain the concept: Moonshot Thinking: Solve for x @ Tribeca Film Festival. Our first teacher presenter linked a goal to this theme nicely.

I have known Phillip Cooke through TeachMeets and Twitter for many years.  He is a passionate secondary school educator and declared this evening that his moonshot concept is teaching for life instead of for exams, a policy I am also passionate about.  I have enjoyed seeing Phillip present on this theme in many variations before. He is always interesting because not only does he and his colleagues come up with the ideas but they actually implement them, although I’m sure he wish he could implement more.  Phillip was intricately involved in the complete rebuild of his school, a school often seen in the industry as an alternative option for the misfits in our education system and thus had a poor reputation for a long time for drugs and disruptive behaviour. However, its hands-on practical approach to education is becoming more dominant in industry discourse and it has featured on a TV show for doing things a little differently.

Phillip’s attitude towards authentic learning is borne out by some of the initiatives he has shared:


If I was to give my own moonshot for teaching and learning is that I desperately want students to be thinking for themselves. As a senior school teacher, I hate how much teaching is about preparing for HSC exams, such as artificial artifice that it diminishes authentic learning.  This is why I always like what Phillip has to say.

Dominic Hearne set the tone of his talk by quoting Gary Stager, “Schools have a sacred obligation to introduce children to things they don’t yet know they love”. In line with this philosophy, Dominic’s school has introduced a series of compulsory critical thinking courses, which I absolutely applaud. These include:

My daughter is currently studying International Relations and Human Rights at university. She would have loved the opportunity to examine some of these topics at school.  Her response being:

One of the students undertaking this course used several sources to investigate the Jewish holocaust and, as might be expected, referred to movie representations of the holocaust such as The Boy in the Striped Pyjamas. He also had access to his grandmother’s letters and other documents depicting her time as a Jew interned by Hitler.  The result was not just a well researched product but the rest of the class had a new insight into the atrocities.

Nick Brierley hooked me by not only emphasising the thinking skill of problem solving but linking to the TV show Stranger Things, where the children in the show are constantly having to solve problems, not always successfully. He advocated the use of BreakoutEDU, a resource for creating engaging problem-solving games in classrooms. This is definitely a tool I will investigate further.
Technology definitely has a role to play in developing students’ critical thinking skills. A primary school teacher, Alfina Jackson commenced with the statement that she hasn’t heard students say they need PD before they can use technology, so if they can do it, teachers can do it too.  Glib, but mostly true. I have come across many teachers who are so ingrained in teaching the same way, with the same worksheets, year after year, that they truly struggle with making more than the occasional change to their regular modus of operation.

Alfina has her own YouTube Channel, mainly consisting of videos made by K-2 students.  These videos demonstrate learning in an authentic and meaningful way for our modern age.  Without many of us realising it, children are learning all the time through YouTube.  Actually many adults too.  I recently used YouTube to learn how to cast-off my knitting.  Alfina is therefore not only teaching students a particular topic, she is teaching digital responsibility.  Creating public videos also motivates students through the hands-on activity and real audience feedback.  All of this requires several higher-order thinking processes.

Another initiative Alfino implemented was Year 1 completing book reviews on Google Slides. For the content, the teacher taught students to use three simple sentence word-starters:
However, after a quick introduction to using Google Slides, the students worked out for themselves and taught each other the various creative features of using the slides.  After the first drafts were completed the teacher provided feedback through the comment feature which prompted students to comment on each other’s reviews, leading to a discussion of how to write positively, particularly in a public domain.

On the other hand, I don’t believe technology should be used for simply its own sake.  Alfino showed how students learning to write could trace the letter on an iPad.  I’m not sure how this particularly improves on the pen and paper version except simply for the hook that it is on an iPad.

The highlight of the evening was the dynamic Kathleen O’Rourke. Kathleen is learning to become a Primary School teacher at Macquarie University after a decade or so in the workforce. She is passionate about many things and her LinkedIn profile reveals she is not only an advocate for education and the marginalised but she walks the talk.  At first I thought she was also going to emphasise technology due to her tagline, “Is it OK to ask students to do something that we are not comfortable to do ourselves?” Instead, Kathleen answered that question with, “If we don’t pursue our x’s how can we expect our students to?”

As part of being a pre-service teacher, Kathleen decided there wasn’t enough professional development on offer, beyond the regular uni courses and practicum experience so out together some events and now the concept has exploded.  As a full-time carer for her grandmother, Kathleen found it difficult to access working disabled toilets, particularly in medical institutions.  Consequently, she has an aim to develop an app that lists and user-rates them. I spoke to Kathleen at the end of the evening and found just how determined she is to put theory into action. Earlier that day she had been at a school presenting to teachers and discussing with them a university assignment. This was not part of the set work.  She has also tutored primary-aged students who are newly settled refugees on a volunteer basis.

I was not the only one who thought Kathleen was amazing. This was the reaction on Twitter:

All in all it was worthwhile attending this TeachMeet.  I learned about some new Google products and enjoyed hearing how other teachers are implementing problem solving and other critical thinking activities.  However, I’d prefer it if future TeachMeets adhered to the no sponsorship ideal, even (especially?) if it means returning to the pubs and clubs where they began.

Jasper Jones - a quick review of the book and film